The first reference to Morris Dancing is dated 31st October 1448 and refers to a tapestry depicting a Morris dance (the tapestry no longer exists). So that’s around five hundred and sixty years ago.

The name “Morris” is said to derive from the term “Moorish”; refering to the Moors of north Africa, who conquered most of Spain in the Middle Ages.

There is NO evidence linking Morris Dancing with pagan rituals. 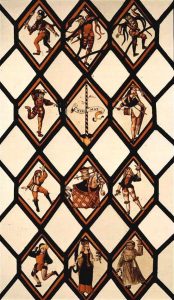 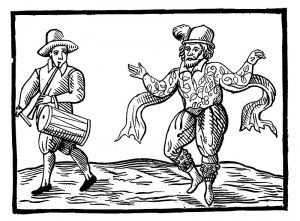 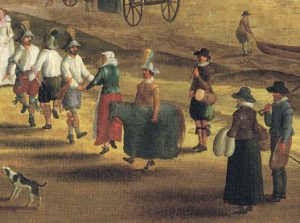 The earliest known image of Morris Dancing is the “Betley Window”. It is a stained glass window which dates to around 1515. It is not known where it was originally installed but at one time it was at Betley Hall in Staffordshire and is now in the Victoria and Albert Museum. As you can see, costumes have changed over the the years but the one thing that has remained constant throughout is the bells.

The records seem to suggest that Morris dancing was concentrated in the major cities of England and then spread out to the surrounding countryside and then died out in the cities; to become a popular rural entertainment. It reached a peak of popularity in Elizabethan times. Later it became a victim of the Puritans and the Cromwell era. Up until the Industrial Reolution it was still widespead across many parts of England but the latter, with its migration of the population from the countyside to the towns, brought about a dramatic decline.

By the end of the 19th Century Morris Dancing had disappeared completely from everywhere except the west Midlands and the Northeast. It was rescued from total oblivion by a handfull of late Victorian enthusiasts who recorded the dances and the music and taught it to as many as would listen. The last century saw a huge revival. 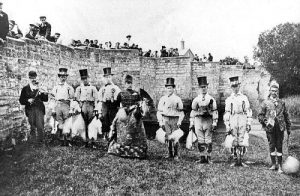 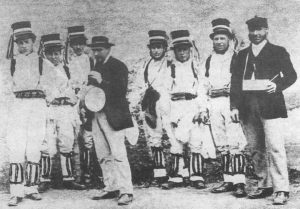 Four villages/towns have maintained an unbroken history of Morris dancing from earliest times up to the present day. They are:- Abingdon, Bampton (Oxfordshire), Chipping Camden and Headington Quarry (near Oxford).

The earliest references to Morris dancing in Hampshire relate to Crondell, near Fleet, in 1555 and to Southampton in 1562.

At one time there would have been a wide variety of styles across the country but by the time the dance collectors started to do their work the were only three general types of Morris dancing left. These are Northwest Morris, Border Morris and Cotswold Morris.

Across the Cotswold villages there were, historically, small variations in the way the dances were performed (differing arm movements, differing stepping, differing dance patterns). These different “sub styles” are known as “traditions”. A dance might be announced as “Constant Billy from the village of Oddington in Gloucestershire”.